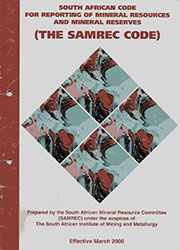 An agreement was reached to incorporate the CMMI standard reporting definitions for mineral resources and mineral reserves into the UN Framework Classification, thus giving truly international status to the CMMI definitions. The definitions in the SAMREC Code are consistent with those agreed at the Denver Accord by the CMMI participants.

The first version of the SAMREC Code was issued in March 2000 and adopted by the JSE in their Listings Requirements later that same year. The relationship with the JSE was critical to the success of the first SAMREC Code and remained so to this day. The Code was adopted by the SAIMM, GSSA, SACNASP, ECSA, IMSSA and SAGC, and is binding on members of these organisations. A second edition of the SAMREC code was issued in 2007 with an amendment being released in 2009. This 2016 edition supersedes the previous versions of the Code.

The formation of the Readers Panel which comprises Competent Persons nominated by the SAMREC Committee who peer-reviewed every CPR submitted to the JSE set the SAMREC Code apart from more established codes in Australia and Canada which relied on the Stock Exchanges to review a sample of CPRs only. The Readers Panel, now the JSE Panel of Readers for Solid Minerals was established in early 2000 with a membership of five mineral industry professionals. The Panel was refreshed and expanded in 2012 and again in 2017. Currently, there are 17 Readers, including the Chairman bringing 600 industry years of experience covering a wide range of mineral commodities. The work of the Readers is defined by the Readers’ Mandate (to be found on this site). Since 2000, over 207 CPRs have been reviewed by the Panel.

Another distinguishing feature of SAMREC was its inclusivity. A total of 13 different Associations and organisations linked to the Minerals Industry were represented on the committee under the auspice of the SAIMM and later the SAIMM and the GSSA.

Concurrently with the evolution of the SAMREC Code, CRIRSCO, initially a committee of the Council of Mining and Metallurgical Institutions (CMMI), has since 2006 maintained the global standard for the reporting of Mineral Resources and Mineral Reserves. SAMREC, a founding member of CRIRSCO has through its representatives, played a major role in the expansion of CRIRSCO from the 5 original members to 15 members and the adoption of international reporting standards throughout the world. The definitions in the current edition of the SAMREC Code are identical to the standard definitions published in the CRIRSCO Reporting Template 2019.

The success of the SAMREC Code over the 20 years can be measured by the vast improvement in the quality of the CPRs submitted to the JSE and the quality of the Annual Reports that are now issued by mining companies and contain SAMREC compliant Mineral Resource and Mineral Reserve statements – the principal assets of the company.